As Hugh Tyler and I queued up at 5am in the crowded but still sleepy town of Gaiole in Chianti for the start of the 2013 edition of L’eroica it seemed as much the culmination of a journey as much as a beginning. It had been on a club ride, almost a year before, that Hugh and I had discussed the idea of riding L’eroica. L’eroica or ‘The Hero’ is not so much a sportive as an experience; a brutally hard cycle ride on vintage bikes wearing vintage kit on largely vintage Tuscan roads. It is a unique mixture of theatre, history and superb Tuscan food washed down with Chianti and Grappa, all set in the most beautiful landscape; sort of ‘Opera on a bike’. Started as recently as 1997 L’eroica aimed to draw attention to the importance of the region’s crushed white limestone roads – the Strade Bianche.

Such has been its success that the roads are now preserved and the route is permanently signposted and the hundreds of miles of lumpy, pot-holed lanes are still there (here the similarity with England ends!) The Saturday is given over to an all day celebration of the golden age of cycling with the whole town turned into a huge cyclojumble where it is possible to buy anything from complete bikes to leather goggles. The Sunday is given over to the 4 rides; 38km;75km;135km and 205km. The legendary Felice Gimondi (Tour de France, Giro, Vuelta, Milan San Remo, World Champ) even turned up to ride.

Not sure what was carried in the box – probably Chianti 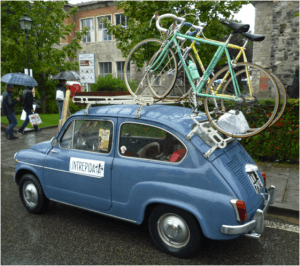 Even the cars were vintage. Over the last year Hugh and I had restored our vintage steel bikes and I had learnt to nail metal cleats onto my Detto Pietro leather shoes as well as mastering the gluing on and changing of tubular tyres. Heavy woollen shirts and uncomfortable woollen shorts (lined with paper thin chamois) and the substitution of modern crash hats with cotton caps and goggles completed the madness. At a dinner on the Friday night, organised by Marco Mori (from Gusto Cycling), Marco had asked who would be riding the 205km route. Out of 70 guests that had booked their tickets through him about 8 of us nervously raised our hands – to the applause and laughter of the other diners. I had a distinct feeling that they knew something that we didn‘t…. Hugh and I met up at 4.45am. Dressed in our woollen outfits and cotton caps we felt very much in keeping. My spare tubular tyres were looped over my shoulders. In a small bag I carried an assortment of small tools ( as you had to be self sufficient in case of breakdown), tubes of tub glue and a copy of the Cyclist’s prayer (taken from the Chapel of the Madonna del Ghisallo Church).

As we would be riding in the dark for the first hour and a half we had lights on our bikes. The first 30 km or so was very easy going on perfectly smooth tarmac. With no warning we hit the first of the many sections of Strade Bianche; a heavily rutted sandy climb. The silence of the tarmac gave way to a crunching of gravel and gears as riders fumbled in the dark with ancient down shifters….no indexing here. I’d read about this first climb on the internet and more importantly its treacherous descent in the dark but was surprised how quickly we were down it without incident. From then on sections of Strade Bianche alternated with tarmac, the quality of the Strade Bianche varying from hard packed to an energy sapping loose gravel and sand mix strewn with stones. The feed stations were like nothing we’d experienced before…no gels or power drinks here but proper food; bruschetta; dried and fresh fruit, cakes and earthen-ware bowls of hot Ribollita, a thick rich broth of cabbage, herbs, beans and vegetables – and a choice of Chianti or Grappa – even water if you looked hard enough. I saw at least one person down what they thought was a cup of water only to discover that it was Grappa. They say that you should frighten yourself once a day…. I had a week’s worth that day. Descending at speed in the dawning light the perfect tarmac suddenly became gravel.

I could not brake and could only steer by gritting my teeth more one side than the other. Hugh on the other hand seemed alarmingly happy descending at great speed on the unforgiving surface. Often on the gravel descents there would be ‘wash boarding‘, a series of hard pronounced ridges that were impossible to avoid (certainly at speed). It made me realise how extraordinarily strong the bicycle actually is as well as how well my dentist had filled my teeth.

Beautiful Tuscan landscape with Chianti hills awaiting us in the distance Over the next few hours I discovered slowly how to ride on gravel; how to not try to bully the bike but to relax on it,; to allow the tyres to cut through the naturally best route and how to steer ever so gently with the knees (a bit like skiing). The hills were tough, occasionally brutally hard. The longest white dirt road climb was about 10km long and averaged 15%.

One hill, also Strade Bianche was 25%. If you stood up off the saddle you immediately lost traction so the steepest sections had be ridden seated. It took concentration and huge effort to keep the back wheel turning and the front wheel on the ground when it started to lift on the steeper sections. Hugh reckoned that we climbed 4000 metres out of which over 70% of it had been on dirt roads. We rode together for the first 6 hours or so with him losing me on the descents whilst we met again on the climbs. At the next feed stop

Hugh was feeling strong; I was feeling ravenously hungry so we agreed to ride on independently

We were so lucky with the weather. The day before it had rained hard all day but overnight the rain had soaked through the limestone roads so that there was little mud and none of the dust normally associated with the Strade Bianche. By lunchtime it was pleasantly warm or at least in my thick woollen itchy jersey it seemed to be. At the next food stop I was approached by one of the helpers and asked if I would spare the time to be photographed for advertising L’eroica in the International press. Vanity immediately took over any need to ride a good time and I was duly ushered off to an outdoor studio. ‘Perfecto – you look like a Hero’, the photographer announced. Before my heart could swell with pride she continued… ‘.because you are so dirty’. As she took the photographs she asked my height, my weight…and my frame size! (I kid you not). Whether it was due to tiredness or mulling over the photographers questions I set off again – the wrong way – to be quickly redirected by a large group of highly amused Italian spectators. At the Friday night Welcome dinner Marco had suggested that we would be very unlikely to get round the ride without punctures or mechanical problems.

With only 55km to ride I started to gloat over how wrong he had been. Almost immediately I started having trouble changing gear and my rear derailleur started making a rattling noise then the chain went completely slack and my pedals span. Somehow on a particularly rough section of road I had managed to bend the derailleur and one of the jockey wheels had completely broken out. I searched frantically for the jockey wheel in case I could repair it but to no avail. I’ve always agreed with Lord Tennyson who said, ‘More things are wrought by prayer than this world dreams of’, and so perhaps also in the spirit of Gino Bartali (who would often make his fellow cyclists attend Mass before a ride) I prayed – ‘Holy Mother of God..’ (OK I’m an Anglican but I was metaphorically in Rome) ‘…please help me mend my chain’. I found my chain splitter and spare chain link so I cut the chain short and turned my 7 speed into a single speed. I selected a climbing cog because I was determined not to have to walk any of the remaining climbs. My prayer was answered with that reassuring crack of the spare link locking. With a lifted spirit I cycled on, my legs spinning madly. The last climbs were indescribably hard with my single gear and I’m not sure which burnt the most; my thighs or my arms wrenching on the handlebars.

By the end of the ride I would hold in the highest esteem those brave few who had ridden the whole ride on single gear bikes. Hugh, some distance ahead of me by now, had had a trouble free super fast ride and finished in the first wave of 205km riders. I limped in some time later absolutely drained but full of good spirit, Ribollita and perhaps a little Chianti and absolutely delighted that I’d made it round and had not had to resort to putting a foot down on any of the climbs. It was undoubtedly the hardest day I’d ever spent on a bike. I thought La Marmotte was pretty tough but this was in another league…. My hands were raw and my arm muscles ached but Hugh and I both agreed that it had been an absolutely brilliant day. As I sat in the nearest bar to the finish line a hugely moustached Italian gent next to me laughed at my repaired bike and showed me that he had sheared off his pedal in the last 35km and had to ride one legged. Now that’s what I call a bloody Hero! 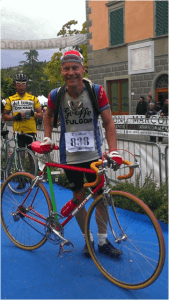 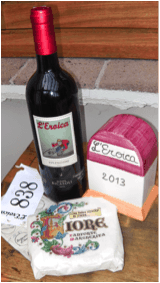